WTT invented modern vacuum drying in the late 1970’s and has supplied more than 250 units over the years.

The vacuum-drying (VD) has 3 unique qualities which differentiate it from traditional kiln drying.

Firstly, it dryes 3 to 5 times faster than conventional kilns and at a lower energy consumption. In this way, VD offers high flexibility in meeting customer demands because of the short cycle time.

VD is especially competitive for drying difficult hardwoods such as (pre-dried) oak and is primarily marketed in the hardwood industry where high and uniform quality is important, e.g. in furniture, flooring, kitchen, musical instruments etc. but also for construction.WTT recently dried WRC beams quickly and with good results.

Secondly, it does not darken the wood as traditional drying so that the e.g. beech wood remains completely white after drying; as demand for light rather than dark wood increases, demand for VD will increase.

Thirdly, VD is a closed system; a sawmill using traditional drying typically emit between 1.000 and 5.000 metric tons of VOC annually; in the VD, most of the turpentine is captured in the condensate. As environmental regulation increases in the future, VD will become more competitive. 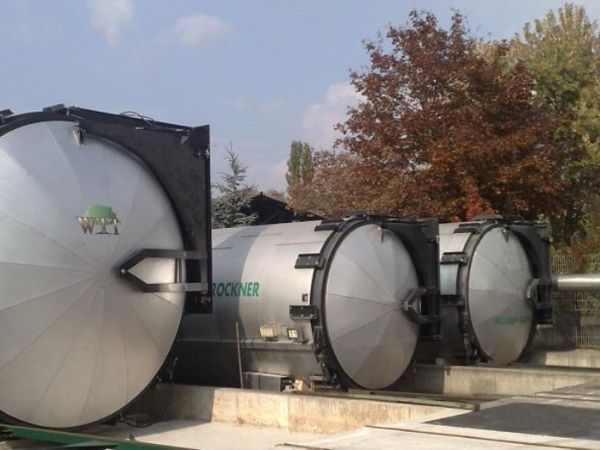 Depending on the type of wood

Depending on the type of wood

This plant is designed for using the super heated steam vacuum drying process (SSV). The SSV basic principle is to control the temperature and the pressure with the aid of steam pressure through which every desired relative humidity (balanced moisture) can be achieved.

In order to control the process exactly, an absolute vacuum is necessary. The SSV process works at 100-220 mbar and starts after an initial vacuum of 80 mbar.

When the desired initial vacuum is achieved, a heating of the wood takes place, controlled in accordance with a drying program through high performance ventilators.

With the aid of a cooling condenser, the water extracted from the wood is condensed. It is very important that the condensation takes place outside the dryer, so that all residual air is removed, to insure a drying free of wood color change.

The exact relative humidity is controlled with the temperature and steam until the desired final humidity of the wood is achieved.

With a conditioning phase and air equalization, the drying is concluded.

In comparison with traditional drying and other vacuum systems, the WTT vacuum dryer offers great advantages

Installation performed by our own technicians